Skip to content
Posted on 2011 by Niki Turner Posted in Barbie, Romance, Twilight

While procrastinating exercising this morning, I read yet another snarky commentary on the Twilight saga. This author pointed out the serious psychological dangers of letting young girls believe that there’s a perfect man out there for them; the risk we take by filling their impressionable tween brains with fluffy romance and ideas of happily-ever-after. (That’s right, Cinderella and Beauty and the Beast and all the other fluffy fairy tales we feed our kids are damaging!)

Sure, the books might not be stand-out examples of literary excellence. Yes, men are freaking out about feminized vampires who glitter and refrain from killing humans and neutered werewolves who cry, pout, and whine. Women think Bella is a spineless weakling and Edward is a dangerous control freak, giving girls the wrong idea about relationships. The idea that the hero refuses to have sex with the heroine before marriage, or that both of them are shhhh… *virgins*, is totally unrealistic. And of course, getting married at 19 is just absurd … after all, no one could really fall in love in high school, right?

I hate to say it, but if we’re worried about the minds of our youth being corrupted by Twilight, we are so far removed from the culture in which we live we risk becoming totally irrelevant. I mean, check out the Ken doll I spotted at Walmart a few weeks ago. 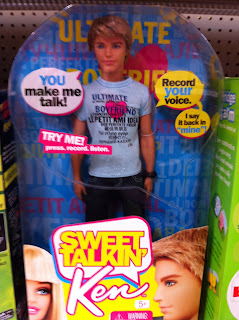 Sweet Talkin’ Ken is billed as the “ultimate boyfriend.” You tell him what you want to hear and he repeats it back to you in “his” voice. Talk about unrealistic … and don’t even get me started on the detrimental effect Barbie’s impossible measurements and lack of muffin top have on the female psyche.

But, gee, could that lack of realism have anything to do with the fact Ken and Barbie are TOYS? Kind of like the Twilight series is FICTION? Remember your definitions now, fiction is not true. It’s for entertainment. It doesn’t have to give an accurate depiction of reality because it isn’t real. Read that again.
It. Is. Not. Real.

Every generation of young people latches on to something – a band, a movie star, a fashion style – that the older generation freaks out about. They’re convinced the collapse of the civilized world will rest solely on Elvis’ swiveling hips or Edward’s sparkly skin. Remember the fervor over Olivia Newton-John’s early ’80s song, “Physical”? Or the protests over the length of the Beatles’ hair? Or the flappers and cropped hair of the ’20s?

This too shall pass.