Skip to content
Posted on 2011 by Niki Turner Posted in a2z, Thanksgiving, traditions

I so wanted to come up with a deep, spiritual post for the letter Y. Not because Y is particularly spiritual, but because I was told Sunday that my posts are “light and humorous” compared to my hubby’s “serious” posts on Facebook. *sigh*

The funny thing? Face to face, hubby is the light and humorous one, and I’m perpetually serious (read: bland). Or that’s how it seems, anyway. Perhaps our alter egos appear when we’re online?vThat said, my “Y” post for this week’s a2z4u and me meme is about yams. Yep, yams.

My momma is from Kentucky. And I don’t just mean she lived there for awhile when she was little. After doing some genealogical research this year, I learned that my ancestors were in Kentucky when no other white folk were there, just Indians. Apparently, they liked the wilderness, as Kentucky was then considered.

This, perhaps, explains my fondness for horse racing, mint juleps, and my ability to make really good biscuits. Or perhaps not. Whatever. Anyway, one of our Thanksgiving staple side dishes when I was growing up was candied yams. I thought everyone ate candied yams for Thanksgiving (and Christmas).

Empty yams into a casserole dish, liberally sprinkle with brown sugar and chunks of butter, then top with marshmallows. Bake at approximately (this was never quite clarified) 350 degrees for about 1/2 hour. Or so. The best round I ever had was the year I baked them without the marshmallows, then added the marshmallows and broiled for a couple minutes. Yummy.

Anybody else have a collection of charmingly non-specific family recipes? You know, the ones with direction that include random measurements, times and temperatures? 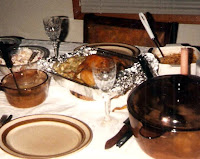 Our first Thanksgiving dinner as parents was spent at home, because our 7-month-old daughter awoke with her first bout of stomach flu. (Yes, we stayed home. In later years with additional children, we headed for grandma’s anyway. She was less distressed by vomit than I was.) I sent hubby to the store for the essentials and created what I thought was a suitable Thanksgiving dinner at the last minute … roasted chicken (they were sold out of turkeys), and mashed potatoes, and green beans, and of course, the yams. (Do you remember Visions glass cookware? It was a wedding gift.)

To my surprise, hubby was not impressed by the candied yams. Regardless, for the past 20+ years, I’ve made the silly things, reducing the amount every year after realizing they will only be eaten by yours truly. And by my father-in-law. (Mom and Dad stopped “doing” holidays years ago.)

I’ve since added other ingredients, depending on the year … crushed pineapple, a hefty dose of Kentucky whiskey, nutmeg, cinnamon … attempting to adjust the recipe to appeal to the masses, to no avail. I’m still the only one who eats ’em.

Now, if I make baked sweet potatoes (aka yams, out here in Colorado), or oven-baked sweet potato fries, some of my kids will eat those. This year, I don’t know … I might just forget them altogether. It seems silly to make an entire side dish just for the sake of tradition.

Which makes me wonder … how many of our church traditions are irrelevant to the masses, to the newly saved, or to those we attempt to reach by promoting those traditions?


Do you have holiday traditions from your childhood that had to be adapted after you got married and/or had kids?

For more a2z4u & me posts, click on the picture! 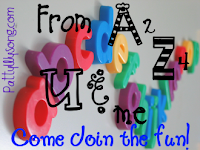