Skip to content
Posted on 2010 by Niki Turner Posted in Clothing, fashion, Underwear 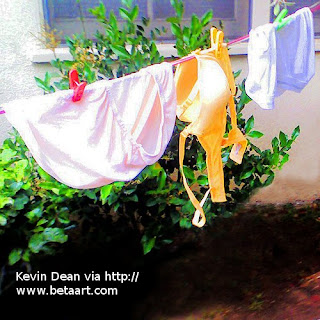 Whatever you call ’em, whatever style or brand you choose, they’re underwear. And, yeah, I’ve got underwear on the brain. Why? Because of an ad for the new line of men’s Spanx.

What does it mean when men start to invade the predominantly female territory of underclothes that squeeze, pull, tuck, and push the flesh into a predefined ideal?
Studies have charted the correlation between changing hemlines and the state of the economy for years. Is there a similar connection between underwear and the state of the union? What do trends in underwear say about the human condition? Did Jesus wear underwear? Would it matter if He did? Or didn’t?

Underwear, as we know it today, is really a very recent addition to the fashion kingdom – only a hundred or so years old. But throughout history, people have worn garments under their regular clothes, whether in the form of the loincloth or chemise. Or, if you are a man in New Guinea, a hollow gourd — the original athletic supporter. Styles and trends have changed for men, and for women, over the years, sometimes for the sake of convenience, sometimes for comfort, sometimes for health. But never before in human history has there been such a wide variety of underclothes from which to choose.
The primary function of underwear is simply to keep sweat and other bodily discharge (ew) away from the outer attire. In a nutshell, that is the basic function of underwear. My, oh my, how we’ve taken that simple function and broadened its horizons, until the simple choice of “unmentionables” (or lack thereof) makes a statement in and of itself.

Victoria’s Secret and Calvin Klein (to name a few) have turned underwear into a fashion statement.
Bra-burning in the ’60s and ’70s was a political statement.
Madonna’s underwear-exposed attire in the ’80s and the gangsta’ style of pants so low half your underwear are showing, those are cultural statements.
Boxers, briefs, bikinis, thongs, tangas … push-ups, padded, minimizers … even “going commando” can be a kind of personality statement. So when your mother told you to make sure you were wearing clean underwear, it was because she knew this deep philosophical truth: Your underwear make a statement about you, whether you show them off or not!