It’s going to get a little ranty here.
Sorry, not sorry, in advance.

The spread of misinformation, particularly when it’s done with the intent to spur fear and wrath, is one of my biggest pet peeves. It comes in a close second to my dislike of people who inconsiderately spread germs to their friends, family members, and co-workers, and even overrides my frustration with misspelled memes.

So, for the sake of truth and justice, here are some of the latest Facebook posts I’ve seen that are… are you ready??? Blatant untruths. You may have seen them, you may have even shared them. If you have, there’s no condemnation… you are a victim. But please, in the future, do a little investigating before you share that “unbelievable” story. Because if it’s THAT unbelievable, it’s probably…um… unbelievable. 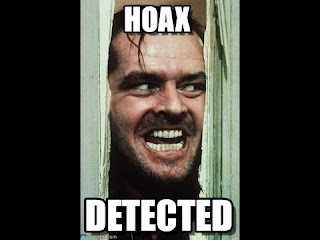 #1.  No Nazi-era submarine has been recovered from the Great Lakes. The photos (Did you know you can research a photo by right-clicking and selecting “search Google for image”?) are from Russia and National Geographic. BTW, Barbara Johnson, shame on you, whoever you are. (http://hoax-alert.leadstories.com/604527-nazi-submarine-discovered-great-lakes.html) #3. Facebook did not remove a picture of “Little Timmy Saluting the Flag” because non-Americans complained. First: If you are SEEING the picture of Little Timmy on Facebook, Facebook didn’t remove the picture. Second: This meme was created and shared by a satire group who likes to stir up conservative angst. The same charming individuals who got your panties in a bunch last year by telling you Denali was a Kenyan word for “Black Power.” Remember that one? (http://www.snopes.com/little-timmy-facebook-flag/)

#4. Those are not the twins you’re looking for. The post that supposedly depicts the conjoined twins separated by Dr. Ben Carson all grown up in their letter jackets, yeah… not them. Sorry. It’s even worse when it’s a happy story and you get played, isn’t it? (http://www.hoax-slayer.net/does-a-circulating-image-depict-now-grown-up-conjoined-twins-separated-by-dr-ben-carson-in-1987/)

I could go on, and on, and on… but it’s too depressing.

Be aware… there are hundreds, maybe thousands, of “satire” sites that look and sound like real news sites, and unless you look closely, you can’t tell the difference. Apparently, it’s gotten so bad Facebook was considering a way to mark certain pages and/or posts as satire.

Case in point: back in December a FB acquaintance shared a post about President Obama refusing to allow soldiers to receive Christmas cards as “the first salvo in the war on Christmas.” Now, I think the “war on Christmas” is a load of hooey anyway, but I did a little research just in case. Come to find out that post was generated by a Facebook page called “Fox News the FB Page.” It looked real, it seemed real. But it’s not real. It’s satire. Really well-done satire. And people are responding in raging, mob-mentality style to these artfully photoshopped posts and shock-value headlines.

So… for your future reference, take a minute to check snopes.com or hoax-slayer.com, both sites have been around a long time, back before FB, even, when our hoaxes arrived in our inboxes with all those notifications that we have a long-lost relative in Bosnia who wants to send us the family jewels, for a shipping fee of $49,000 wired directly to said relative.

And here’s a link to a list of satire, fake news, parody, and conspiracy theory sites: (I can’t even tell you how many of my friends are apparently subscribed to some of these… SMH) https://www.facebook.com/notes/hoaxes-on-fb/list-of-satire-parody-fake-news-conspiracy-theory-sites/1063012267075709

When in doubt, check it out.