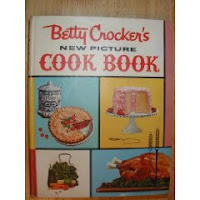 Even as a child I wrestled with the idea of the “perfect” mother. At some point during my elementary school years I asked my own mother why she “didn’t bake cookies and wear an apron, like the other mommies.”
“Because I work,” she replied. Now, this was the late ’70s, early ’80s. Apron-wearing mommas were getting farther and fewer between in the age of “I can bring home the bacon, fry it up in a pan” women.
Where did I get my maternal paradigm? I think it may have come from my Mom’s 1961 Betty Crocker cookbook, with brown rings scorched on the cover where she set it on the stove’s electric burner by accident. I pored over that book with its tabbed sections on planning dinner parties and setting a proper table, and suggestions like “freshen your lipstick and perfume before your husband comes in from work.”
When I had my own children, I quickly discovered my paradigm was a pipe dream. Sure, I was a SAHM (Stay At Home Mom) who didn’t have to work outside the home, but I couldn’t seem to manage being fully dressed and smiling while I served a hot breakfast to my grateful family.
More days than I care to recall, I didn’t manage to get dressed in anything except the pajamas I’d slept in the night before. And I was sure my smiling storybook family had been abducted by aliens and replaced with a fussy baby and cranky toddlers intent on destroying one another before their generic Cheerios were gone.
I didn’t bake. It was too hard with a baby in a backpack and a toddler on each leg. I didn’t own an apron and wouldn’t have known where to buy one. And the oldest kid, or the dog, had eaten my lipstick. It’s still a mystery.
I was a maternal failure.
And one day I read about the most famous mother of all. (If you’ve got the “Rudolph the Red-Nosed Reindeer” song in your head now, that’s good. It will help you remember this!)
The first chapter of the book of Luke tells us the story of an unwed teenage mother who, if she lived in today’s world, would probably be hospitalized as delusional. Her name is Mary.
Mary was engaged, and historical data tells us she was probably between 14 and 16 years of age. One day an angel appears to her and tells her she’s going to give birth to the son of God, who will become the savior of the world. Her response? After she asks “how,” which was a logical question, she simply says, in modern vernacular, “okay, whatever You say.”
Her cousin, Elizabeth, describes Mary this way: “Blessed is she who has believed that what the Lord has said to her will be accomplished.”
What kind of mother does this make Mary, the mother of Jesus? She’s a “faith-mom,” and that’s the kind of mother I want to be.
I heard a minister say, “The best thing you can do for your family is be a woman who hears from heaven.” Not a woman who does craft projects, bakes the best cookies, has the cleanest house, dresses well, or participates regularly in school functions, (though none of those things are bad); but a woman who hears from God and believes what He says concerning her husband, her children, herself, and her household. She believes the best, she looks beyond what is “seen” to that which, as yet, is “unseen.”
For the mother of a toddler struggling with recurrent ear infections, that means looking beyond those moments of lost sleep and doctor’s bills, to see that child healthy and whole, and believing “it shall be.”
For the mother of a child struggling in school, that means believing “all my children are taught by the Lord” and they “grow in wisdom, in stature, and in favor with God and man.”
For the mother of a teenager going through a troubled period, it means confessing and praying over that teen, “the Lord will perfect that which concerns me,” and “He will bring to completion this good work which He has begun in You.”
I know of a mother whose children are all grown now. When her oldest son was out partying and carousing, she would pray, and the Holy Spirit would let her know where he was. She went so far as to go collect his inebriated personage and take him home. All the while, confessing over him that he would become the man of God he was destined to be. And he did! Now, that’s hard to do! But that’s being a “faith mom.” And I can think of no higher goal to attain as a mother.
Happy Mother’s Day!

One thought on “The Most Famous Mother of All”