Skip to content
Posted on 2013 by Niki Turner Posted in 2013, Accept, Engage, Release
Lots of folks are adopting a “word-for-the-year,” taking one word, like “enlightenment” or “renewal” or “gratitude,” and working that word and its meaning into their daily lives throughout the course of the year. I wanted one word… I got three.
#1: RELEASE. Letting go of old mental, spiritual, emotional, and physical baggage that hinders, causes “drag,” and generally gunks up life. Things like worry, fear, offense, anger, unforgiveness, bad habits, and so forth, are all things that need to be released. As fellow writer Patty Wysong wrote in a recent post, “You know how it is when you have to pry something forcibly out of a child’s hand? Well, that was me. And I know better. Much better. But God is faithful and merciful. And ever-so loving. Last week I unfisted my hand. As my fingers extended, relief, peace and great joy came flooding back.”
Let it go, you’ll be glad you did.

#2: ACCEPT. As I wrote in my last post, this may well be the most difficult of the three assignments for me. What is the opposite of accept? To reject, refuse, deny, denounce, repudiate. Sure, there are plenty of things that come our way that we should refuse and reject. Abuse, oppression, tyranny, manipulation, intimidation, none of those things are “acceptable” in any form. But if you’re like me, and you find that you are perpetually in “fight or flight” mode about everything, then learning the art of acceptance is wise and will bring peace to your embattled soul. (There will be more on ACCEPT in the months to come. I’m taking baby steps. Baby steps, Bob, baby steps.)

#3: ENGAGE.
I tried to get God to change this to “embrace” or some other nice, soft, fluffy word. But, no.
“Engage?” I asked, “What’s engage?”
And I remembered this…

Really, Lord? How come I’m back to the whole “fighting” analogy here? Wasn’t that what I was trying to get beyond with ACCEPT?

First, to engage, used as a verb, means:
Why the Top Gun reference? Because Maverick (if you remember the movie) had suffered a tremendous loss and the subsequent sense of failure and shame kept him from “engaging” in combat (or even in training) when he needed to. That nagging sense of self-doubt and the all-too-natural desire to protect oneself from hurt will cause paralysis if it isn’t conquered. Even after we RELEASE and ACCEPT, when a similar situation presents itself, our natural response is to shy away from it in self-preservation.
If you’ve been hurt by people, you don’t want to get involved with them again. If you’ve suffered a rejection or a failure, you shy away from that activity instead of occupying yourself with it. For example, after my 8th grade humiliation during the gymnastics unit in P.E. class, I never approached a gymnastics vault again. I slipped on the springboard (because I was wearing socks, because all the “cool” girls were wearing socks instead of going barefoot), and I slid under the vault, reappearing on the other side, on my butt. No more gymnastics for me. It’s funny to look back on today (and, I’m sure, was quite amusing to watch at the time) but what if I’d been called to be a gymnast?
Failure to engage becomes a real problem when an activity or environment are part of your God-given gifts and calling. Suddenly you’re a fighter pilot who can’t fire, a writer who can’t write, an artist who can’t paint, a lawyer who can’t argue a case, a doctor who’s afraid to make a diagnosis or write a prescription, or a mailman too afraid to deliver the mail for fear of being bit by a cranky dog.
Too many withdrawals, too many episodes of drawing back, and eventually we’re just existing, afraid of our own shadows, “going through the motions” without engaging in anything. We’re there, but we’re not there. Being all there is the ultimate goal of the third step. Whether we’re at play, at rest, or at work, I don’t believe God wants us to merely exist. Jesus put it quite plainly:

“I came so they can have real and eternal life, more and better life than they ever dreamed of.” 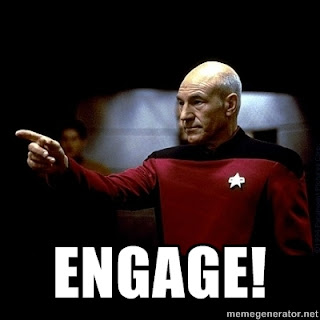