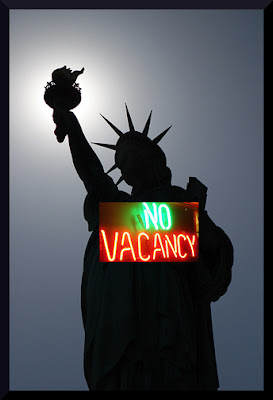 I’m a descendant of immigrants. German. Irish. Welsh. Scottish. English. I located the passenger log for my great great-grandfather’s emigration from Germany. He landed, like most of his ilk, at Ellis Island in New York Harbor. I don’t know if he ever became a legalized American citizen. Or if he ever learned to speak English.
My husband’s grandpa used to tell the story of the five Irish brothers who came to America during the potato famine. If you’ve read any history from that era, the Irish were escaping economic and environmental disaster on the Emerald Isle in droves. They weren’t well liked when they arrived in the land of hope and promise. (Anti-Irish sentiment is called hibernophobia.) They were accused of being drunkards, pagans, unable to speak proper English, and of monopolizing all the lower-paying jobs. Classified help wanted ads often included a disclaimer: “Irish need not apply.” Half the population of Ireland emigrated to America in less than 15 years, the largest influx of immigrants our country had ever seen. Those numbers were later topped by the mass exodus of Germans who came here to escape war, government oppression, religious persecution, and poverty. Like the Irish, the Germans, and the Italians, and later the Chinese and the Koreans and the Vietnamese and the Puerto Ricans, met with prejudice and racist sentiment.

As soon as they were able, many immigrants left the cities and scattered to the wide open west, where your ability to work hard, endure difficult living conditions, and prove your mettle was more important than your accent, your background, or your religion. That’s how my German great great-grandpa ended up in Colorado, working for the Colorado Midland railroad.
I’m thankful the borders were open for my ancestors. Thankful they were able to take advantage of the famous words of Emma Lazarus’ sonnet now immortalized on a plaque inside the Statue of Liberty. Do these words still apply to our nation today?
The New Colossus
Not like the brazen giant of Greek fame,
With conquering limbs astride from land to land;
Here at our sea-washed, sunset gates shall stand
A mighty woman with a torch, whose flame
Is the imprisoned lightning, and her name
Mother of Exiles. From her beacon-hand
Glows world-wide welcome; her mild eyes command
The air-bridged harbor that twin cities frame.
“Keep, ancient lands, your storied pomp!” cries she
With silent lips. “Give me your tired, your poor,
Your huddled masses yearning to breathe free,
The wretched refuse of your teeming shore.
Send these, the homeless, tempest-tossed to me,
I lift my lamp beside the golden door!”
Emma Lazarus, 1883
I know there are problems. My father nearly took a job with Border Patrol in El Centro, California more than 30 years ago. It’s not like this is a new issue. Why are these people willing to risk life and limb to get into this nation illegally? Is it so difficult to come here legally now? Do we need an “Ellis Island” at all our borders? Maybe we do. I don’t know what the answers are, but history has taught us something: animosity, bigotry, and xenophobic nationalism are not solutions. They just exacerbate the problem.
Now, when I’m irritated because no one at Wal-Mart speaks English, or there are no rentals available because they’ve been snapped up by legal and/or illegal Hispanics, and my teenagers have a hard time finding an entry-level job, or when you scan radio stations and there are as many in Spanish as there are in English … I have to stop and think about my Irish, German, Welsh, Scottish, etc., ancestry. I don’t want to be counted among the persecutors, no matter where the immigrants are from.
http://www.pikespeakhsmuseum.org/Museum/Main%20Headings/Railroads.htm