Skip to content
Posted on 2009 by Niki Turner Posted in Christian, Moses, Pig, Porcupine
Ask someone if they’ve “kissed the pig” these days and they’ll probably know you’re talking about the swine flu. If you’ve ever been to a hog farm, you know just how gross the idea of kissing a pig (not the pink, animated, cleaned up for the fair version) is. They stink. The smell from a hog farm literally follows you home. But what’s worse than kissing a pig? How about kissing a porcupine? 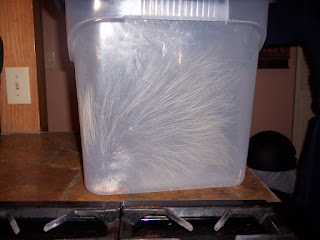 (My son caught this baby porcupine in the backyard, trapped it in a Rubbermaid, and brought it in the kitchen for us to see. It was about 1 a.m., so my pictures aren’t so great – I was still mostly asleep. He had the cutest little face, and paws. But the rest of his body was covered in mean-looking quills, and he was pretty feisty. The boys took him up the road and released him by the creek. No porcupines were harmed in the creation of this photo. )
You can compare an offense to a porcupine quill. Quills are barbed at the end. When they penetrate the skin they cannot be removed without taking some flesh with them. The way the quill is designed, the barbed point will twist through the flesh of the animal. Besides becoming a potential site of infection, quills can actually pierce the vital organs of an animal and cause death.
The most common site in animals for a quill attack is the nose and mouth. Perhaps this is why we should take heed to the advice, “Keep your nose out of someone else’s business!” You’ll avoid many opportunities for offense by minding where you put your nose and mouth.
Unlike a porcupine quill, there is no obvious physical object protruding from the body of an offended human, but there are symptoms of offense that, detected and treated early, can greatly reduce the negative effects involved in an attack of offense.
SYMPTOMS OF OFFENSE
1. Complaining
The earliest warning sign of offense is complaining. When you find yourself griping, grumbling, murmuring, whining, or fussing about a person, place or thing, beware! One minister says when you start to feel mistreated you know the devil is working on you.
The Bible doesn’t have anything good to say about complaining or complainers. Complaints against Moses and Aaron in the book of Exodus brought about the destruction of multitudes.

Complaining, a seemingly minor thing, is included with sexual immorality, idolatry, and tempting God in 1 Corinthians 10—and yet our world is filled with people who feel it is their God-given responsibility to complain about everything from their arthritis to the way the chairs are arranged. Tell a chronic grumbler to stop and you’re likely to be told that you are uncaring, unfeeling, and unsympathetic. After all, if you loved them you would want to know how they feel!

Moses’ own sister, Miriam, the sweet little girl who kept charge of her baby brother in his basket as he floated down the Nile, was later stricken with leprosy. Why? Because she began to complain to others about her brother’s marriage to an Ethiopian woman. In-law problems, interracial marriage and maybe a little bigotry, all before we get out of the second book of the Bible! And who says the Bible isn’t relevant in the so-called “post-Christian” era?
Complaining is a serious matter in the eyes of God. He takes it personally when we gripe and grumble. It’s  dangerous for wives to complain about their husbands, for children to grumble about their parents, and for employees to bad-mouth the boss. Complaining about the president, the IRS, and your Visa bill isn’t any better. Where there is complaining, destruction is probably not far behind.
2. Quarreling The second symptom of offense is revealed in John 6:52. “The Jews therefore quarreled among themselves, saying, “How can this Man give us His flesh to eat?” The word for “quarreled” means to strive or to fight. They began to fight over words. 1 Timothy 6 admonishes us to avoid disputes and arguments over words. Offense left unchecked will result in strife. If you gripe and complain about your husband or wife long enough, you will eventually pick a fight with them! Strife is an open door to spiritual infection: “Where envying and strife is, there is confusion and every evil work.” (Jam 3:16 KJV)
If you feel confused you need to thoroughly examine your life for strife in any form. If you have taken offense and allowed it to breed into a dispute or argument, that may be the source of your confusion.
Did you know you can be in a dispute with someone and never say a word? You may not have an actual quarrel, but if you find yourself wishing you could just “give them a piece of your mind” or having imaginary arguments with them while you’re driving to work or vacuuming the rug, you have a dispute with that individual that you need to clear up.
“Conflict resolution” is a popular phrase in counseling today. It seems we all know how to get involved in conflict with others, but we don’t know how to get out of it! Married couples often have sore spots in their relationships, offenses that took place sometimes years before, that they simply avoid discussing because it generally starts a fight. That’s lousy conflict resolution, and if it isn’t corrected, it will progress to the next stage of offense.
3. Avoidance
The third symptom of offense is revealed in John 6:66. “From that time many of His disciples went back and walked with Him no more.” The third symptom of offense is avoidance. The offended person first complains, then argues, and finally withdraws from the relationship.
Think of it this way – a dog with porcupine quills is not a happy dog, and if you mess around with those quills, that dog is liable to bite you!
Avoidance is choosing to stay away from places, events, even other relationships, in order to avoid contact with the people or persons you are offended at. It’s averting your eyes in the parking lot at the shopping mall and pretending you don’t see someone. It’s changing churches because “so and so” goes to that church and you “just can’t get along” with him or her.
It feels terrible to experience avoidance, it’s like having parts of your life suddenly become “blacked out.” Soon, avoiding the perceived source of offense takes control of your life, coloring everything you do and everywhere you go.
Please, if you find yourself experiencing any of these symptoms: complaining, strife, avoidance, it’s time to take the cure. Do not let offense go unchecked in your life at any level. You wouldn’t allow your children to play with matches—don’t allow yourself to play with offense. Yielding to hurt feelings, irritation, or resentment is just asking to get burned.
Tomorrow we will address the treatment plan for offense infection. If you aren’t already a subscriber or a follower, sign up so you don’t miss a post. Get the cure, so you can get over it!

If you want to get this information all in one place at one time, it’s in my book, The Judas Trap, available at Amazon.com. I’m giving away a free copy this week. (It’s excellent preparation for the holidays… all that time with in-laws and family members provides plenty of opportunities to get offended.)