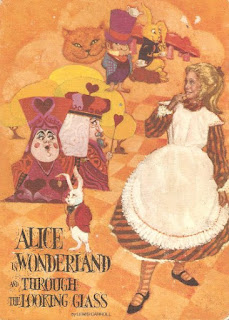 The copy of Alice’s Adventures in Wonderland I’m reading has been in my possession since I was a little girl. It was part of a set that included The Wizard of Oz and Arabian Nights and Rudyard Kipling’s Just So Stories. In this set, the margins contain pen-and-ink illustrations and/or definitions of some of the words used in the stories. While reading a book written in England during the Victorian era (Queen Victoria herself was one of the first fans of Alice) this kind of commentary comes in handy.

For example, hatters, people who made and shaped the fashionable hats worn at the time, were commonly known to behave in all sorts of strange ways. Why? Because the chemicals used in the hat-making process were toxic.

From wikipedia: Although the name “Mad Hatter” was undoubtedly inspired by the phrase “as mad as a hatter”, there is some uncertainty as to the origins of this phrase. As mercury was used in the process of curing pelts used in some hats, it was impossible for hatters to avoid inhaling the mercury fumes given off during the hatmaking process. Hatters and mill workers often suffered mercury poisoning as residual mercury vapor caused neurological damage including confused speech and distorted vision; hatmaking was the main trade in Stockport, near where Carroll grew up. It was not unusual then for hatters to appear disturbed or mentally confused; many died early as a result of mercury poisoning. However, the Mad Hatter does not exhibit the symptoms of mercury poisoning, which include “excessive timidity, diffidence, increasing shyness, loss of self-confidence, anxiety, and a desire to remain unobserved and unobtrusive.”[1]

Like Minnie Pearl, the Mad Hatter has the price tag on his hat in the story. I suppose we’ll see if that detail carries over to the film this weekend! And look for straw on the March Hare’s head, which was considered a sign of madness. The March Hare is frequently depicted with pieces of straw scattered on his head. Well, technically the March Hare should probably be female, not male, but no one knew that at the time…

Via wikipedia: It is reported in The Annotated Alice by Martin Gardner that this proverb is based on popular belief about hares’ behaviour at the beginning of the long breeding season, which lasts from February to September in Britain. Early in the season, unreceptive females often use their forelegs to repel overenthusiastic males. It used to be incorrectly believed that these bouts were between males fighting for breeding supremacy.[2]

Yesterday, I came to the famous tea party scene where Alice meets the Mad Hatter and the March Hare.  eternally trapped at six o’clock. The Hatter’s crime, according to the Queen of Hearts: “murdering the time.”
Ouch. 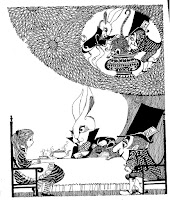 We were notified by scientists yesterday that the violent Chilean earthquake (the seventh strongest on record)  last weekend has bumped the earth off its axis a bit, thereby shortening the duration of each day by fractions of a second. Remember pinball games? When you wiggled the machine around to move the ball it buzzed and blinked “TILT” and everyone knew you were cheating? Is that what the earth is trying to tell us? Just a thought.

Time is our one constant, the great equalizer. No matter where you live, your gender, your age, your political party or your socioeconomic status, we’ve all got the same amount of time in a day. Maybe not the same number of days total, but if we take one day at a time, as Jesus admonished us to do, we all start out on equal footing. And time seems even more elusive and out of our control than money!

What we do with each day is, for the most part, up to us. Will we use the time we have with wisdom, or will we let the hours dribble through our fingers and trap ourselves, as the Mad Hatter and the March Hare are trapped, in an endless rotation of meals, nonsensical riddles, and questions with no answers? 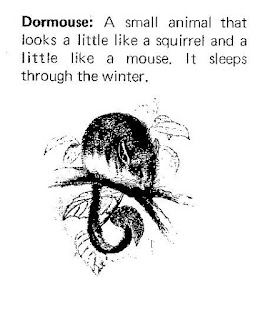 Or are we like the dormouse, sleeping through the party, waiting for some as yet unannounced event to lure us out of hibernation? The dormouse, you know, shouldn’t have been sleeping at all, since the story is set in May.

My own attempts to stop murdering time usually twiddle out after a few hours. I need help! I have this verse tucked in the front of my planner, and I think of it frequently. It’s a good thing to pray!

4 thoughts on “Of hatters and hares and killing time”