Following up, I am now 17 days post-op following a total abdominal hysterectomy and bilateral salpingo-oophorectomy. In the words of my dear sister-in-law, “the baby maker is gone, but the playpen remains.”
The surgery itself wasn’t too bad, barring the multiple failed attempts to get my IV attached in pre-op… and the creepy animals on the ceiling. You know those printed plastic inserts for fluorescent lights they use in preschools and dental offices? Here’s what met my eye in the pre-op room: 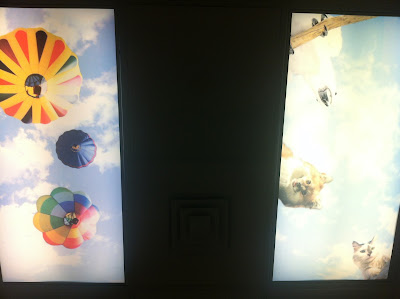 The image on the left is clear… hot air balloons. That seems logical, right? It was the image to the right that creeped me out. If you can’t see it clearly, it’s a cockatoo, a Pomeranian dog, and a cat looking DOWN at you. As if you were at the bottom of an open grave or something. Ugh. Don’t take your overactive imagination with you to the hospital.

Anyway. I love my doctor. She’s awesome. An ’80s hair band was playing when they wheeled me into the operating room. I felt quite at home, despite the weird cross-like contraption they strap you to.

When I woke up, I was in extreme pain, much more than I expected. That’s partially due to the fact my IV had come unhooked somewhere between surgery and my hospital bed and drizzled who-knows-how-much of my painkiller onto my blanket instead of into my body. Not cool. And instead of three tiny laparoscopic incisions, I had a nice 6-inch gash across my lower abdomen.

It took awhile to get the pain under control. Several hours, I think, while I alternated between punching frantically at the self-medicating button and clenching my husband’s hand. I was terrified I was going to stop breathing. Eventually my doctor came in and, apparently recognizing my panic, dosed me up with an anti-anxiety medication in my IV. Things got much better after that.

When I was mostly coherent again, my doctor informed me that the initial laparoscopy had revealed Stage IV endometriosis, necessitating an open abdominal procedure. The pictures (I’ll spare you) from the surgery are enlightening. No wonder I’ve felt like my knickers were in a knot… they were!

I was released the following afternoon after successfully peeing in the potty. My grandson gets a sticker, I got to go home! Thanks to Dilaudid and Percocet, those first few uncomfortable days are kind of fuzzy. Hubby and kids took terrific care of me, and made sure I didn’t want for anything. A little over two weeks later I’m moving around a little better, my incision is healing slowly but surely, and I’m starting to get frustrated with the SLOW pace of healing. I can feed my chickens and dog again, manage my daily hygiene, and shuffle around my house doing nothing because I can’t lift anything, sweep, mop, vacuum, drive, do laundry, or anything else of use. Every time I take a walk I pay for it for several days afterward in the form of increased pain and discomfort. I hate feeling useless, and this process has revealed just how much of my self-esteem and identity are tied up in what I can DO everyday, as opposed to who I AM in Christ.

The most astonishing thing to me has been the number of friends and family who’ve “come out” and shared their own hysterectomy stories. Women I’ve known for years, and yet had no idea they’d had the same surgery. Why is this procedure, which approximately 40 percent of American women will undergo, kept under wraps? Why isn’t it discussed? Compared? BRAGGED ABOUT? If there was a male equivalent (there’s not), men would be wearing T-shirts, sporting bumper stickers, and organizing group events. But no, hysterectomy (like miscarriage) is still a hush-hush event. It shouldn’t be. I was fortunate to find a group online called www.hystersisters.com. More than 300,000 women sharing their stories, their experiences, and their feelings about hysterectomy, answering each other’s questions and encouraging one another through the pre-operative jitters and the post-operative recovery period. It has been a huge blessing.

Anyway, I’ve got a few more weeks of taking it easy, and from what I understand, several months until I’m 100 percent. It’s a little more than the 1-2 weeks I was planning for, but it’s worth it to avoid a future bowel resection, get all the endometriosis cleared out, and push the reset button on my screwy hormones!

6 thoughts on “Not bronzed, but I do have pictures!”