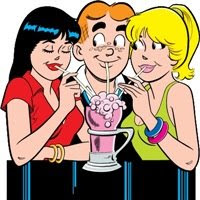 The news is out. Archie Andrews has made his decision. In the 600th edition of the 65 year old comic, Archie will propose to his on-again, off-again girlfriend Veronica. That leaves sweet, girl-next-door Betty stuck with Jughead and his weird hat. Or arrogant bad-boy Reggie.

We should have seen it coming. Archie’s always got his eyes on Veronica, even when Betty’s got her eyes on him. Or is Betty looking at Veronica? Oh dear.

Before you get mad at Archie, or “dis” Veronica, or feel sorry for Betty, let’s be real. Good girls don’t win in the game of love.

Dan Kiley described this principle more than twenty years ago in his book, “The Peter Pan Syndrome.” In it, he explains that Peter (the quintessential man-boy), though a part of him is attracted to Wendy and her mothering ability, will always choose Tinkerbell in the end. Yes, the same Tinkerbell who sells Peter down the river to Cap’n Hook out of spite and jealousy.

We all married little Peter Pans. The magical boy who was entranced by some aspect of our personalities. The one who swept us off our feet and carried us away to Never-Neverland. In our imaginations, Peter would eventually quit playing childish war games, risking life and limb for the sake of an adrenaline rush; he’d stop spending all his time hanging out with the Lost Boys; and he would grow up into a responsible man to whom we could safely entrust our lives.

If you’ve been married-or in a long-term relationship-you’ve probably learned at least two things by now. One, Peter never really grows up, at least not in the ways you expected him to; and two, he doesn’t appreciate all your mothering nearly as much as you thought he would. Disappointing? Yes, if you’re nothing but a Wendy. But none of us are “just” Wendys or Bettys. Every woman has a Tinkerbell spirit somewhere on the inside. (Read “Captivating,” by John and Staci Eldredge.)

The end of the Archie/Betty/Veronica love triangle illustrates the same principle. Betty has always “been there” for Archie. Veronica does as she pleases. Betty is dependent, Veronica is independent. Can you see the Wendy/Tinkerbell parallel, here?

Here’s the problem: Women, especially Christian women, are raised to be Wendys, not Tinks; Bettys, not Veronicas. While men’s culture-Christian and secular-glorifies the mystery, glamour and adventure of the Tinkerbells, women’s culture promotes the idea of becoming the best Wendy/Betty you can be. Want a real-life example? Brad Pitt=Peter Pan, Jennifer Aniston=Wendy/Betty, and Angelina Jolie=Tinkerbell/Veronica.

Don’t get me wrong. There’s nothing wrong with Betty. Betty’s a nice girl. She’s a great friend. There’s nothing wrong with Wendy, either. Wendy is a caretaker. She takes care of her father, her mother, Nana the dog, and her little brothers. When responsibility knocks, Wendy answers. Someday she’ll be a great homemaker and a good mom. But she doesn’t win what she wants most: Peter’s heart.

When it comes to being the woman of our husband’s dreams, we’d better dig out that sassy, sexy, independent woman who got buried under maternity clothes and burp rags and cookbooks. Why? Because that’s who he married, ladies! He married the Veronica, or the Tinkerbell, he saw in you, and that’s who he still dreams about. Don’t leave him wondering where she went!