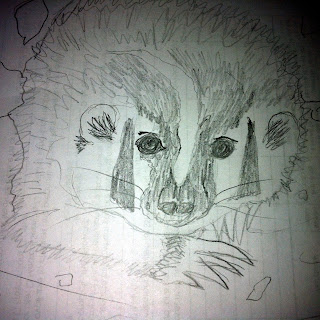 I don’t know much about “spirit animals,” but every time this subject comes up, I have to laugh.

Years ago, Christian counselor Gary Smalley released a personality type based on four animals: lion, otter, beaver, and golden retriever. (You can take the test HERE.) Each animal corresponds to one of the four major personality types used in various other tests (choleric, sanguine, melancholy, phlegmatic.)
My test, like all my tests, came out about as completely bipolar as it’s possible to be. I was a lion/beaver. Or a beaver/lion (depends on the day.) My husband laughed, and suggested, “You’re not a beaver or a lion, you’re a badger… kind of like a beaver with TEETH.” At the time, I was mildly offended. I’ve since learned to wear my badger badge with pride. As the saying goes, if the shoe fits…
All shelter underground, living in burrows called setts, which may be very extensive…
I’ve always wanted to live underground. My fifth-grade science project was a model of an underground, solar-powered home. I was green before it was cool. I want a camera I can lower into an anthill, a rabbit warren, or (now that I know what it’s called) a badger sett! I will probably be disappointed when I don’t find little armchairs and bookshelves…
Some are solitary, while others are known to form clans called cetes. Cete size is variable from two to fifteen.
So THAT’S what we call our little blended household. It’s not a commune, it’s a cete!
Badgers can run at 16–19 mph for short periods of time.
Short legs = short distance. I resemble that remark.
Badgers are known to sleep for 29-hour stretches during the winter months.
Considering my disgust with Colorado’s typical April weather, I could go for that.
Badgers can be fierce animals and will protect themselves and their young at all costs, and are capable of fighting off much larger animals.
In other words, do not mess with my kids, my family, or my friends. I will eat you. Or at least seriously mangle your shins.