Skip to content
Posted on 2013 by Niki Turner Posted in 30 Day Drawing Challenge
Today I discovered that while I distinctly remember how to ride a bicycle, and I clearly remember my first bike (my dad painted it British racing green and my mom reupholstered the banana seat in black Naugahyde), I do not remember enough about the way my bike was put together to draw it. At least not without leaving the seat and handlebars floating magically over the wheels.
That bike probably logged thousands of miles as I rode in circles around and around our circular driveway (each “lap” was a mile in my imagination). I would look up the distance to various places, pack a suitcase, and once upon my bike, pretend it was an airplane. A quick flight to Denver was almost 200 miles. I spent a lot of time on that bicycle.
But, unable to create a decent facsimile with pen and ink, I moved on to my next-first mode of transportation: my black 1981 Jeep CJ-7 Laredo, with glass-pack dual mufflers and a 304 V8 engine. 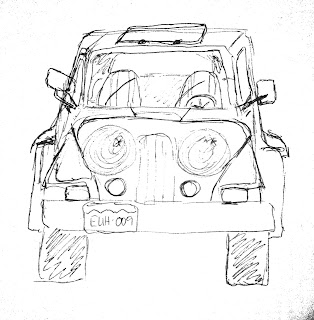 It had 50,000 miles on the odometer when I started driving it at 16. When I stopped driving it at 19, it had just crossed the 100,000 mile mark. And I can only remember taking two out-of-town trips. That 50,000 miles came from “cruising Grand” every weekend, and some weeknights, summers, and holidays. Since our cruising route was less that 25 blocks long, that adds up to a lot of back and forth. I must have been practicing on my bike.
My senior class voted me “worst female driver.” Not because I ever had an accident, or wrecked, or even got a ticket. No, I just scared people. My Jeep was like an extension of my body, I was so familiar with the way it handled, and I pushed it (and myself) to the limit. “God looks after fools, drunkards, and children,” my mother used to say. I figure I was all three, sometimes all at once. Drawing that Jeep reminds me to thank Him for His mercy!