Three weeks and two days without Stepford-wife drugs in my system. I liken this phase to that “pins and needles” feeling you get after your foot falls asleep. Excruciating, agonizing, and generally impossible to do anything about except ENDURE. I hadn’t realized how numb I’d become. Comfortably numb, in fact, to quote Pink Floyd.

Well, nothing’s numb now! Everything, good and bad, strikes me upside the head like a gale-force wind, inducing one of two reactions: rage or tears, and sometimes in unison!

Ah yes, I remember this shrieking, ranting woman from my younger years. If anything, she’s meaner now than she used to be; the result of years of snarky comments backlogged behind a firewall of medication, I suppose.

What I don’t remember are the tears and the weepiness and the sudden urge to sob hysterically with or without benefit of PMS. That’s new. OK, so I’m probably overdue. I can count on both hands the number of sob-fests I’ve had since I started taking Effexor. Sometimes when I wanted to cry I couldn’t. Not so anymore! Now I can barely stop.

My mettle (yes, that is the correct word, it means courage, spirit, valor, or inherent character, disposition or temperament) has been tried and tested this week, without benefit of mind-altering drugs. (Whoever thinks prescription medications are less dangerous than the illegal stuff simply hasn’t taken them. ‘Nuf said.)

1. The Patrick got a speeding ticket. For most people, this is not considered a big deal. In my addled state, this is a BIG DEAL. You see, I’ve never had a speeding ticket. Hubby gets one every time the last one comes off the insurance, it seems. (He insists that is not the case, but my perception is my reality.) Thankfully, the officer was kind and merciful (perhaps HE is on antidepressants?) and didn’t fine him double for being in a construction zone, among other mercies which shall not be mentioned here.

2. The Lukester broke his wrist. Again. (I think this is the 3rd time.. 1st time snowboarding/skiing, 2nd time playing football.) According to the doc, if it “feels better” in two weeks, it may have been a sprain. Sheesh. Did X-rays used to be more effective, or have people just forgotten how to read them? If not, he’ll have to go to the orthopedist for more X-rays and such. This injury is the result of a fall while skateboarding, which, if I may rant for a moment, is quite possibly one of the most stupid human activities ever devised by man. Right up there with snake-handling, bungee jumping, and fire-walking.

These two incidents occurred within 24 hours of each other, and I attempted a female Hulk transformation each time. Now I’m tired and achy and slightly green. If stress burned calories I’d be really, really thin.

The Patrick tells me the ticket was a “wake-up call,” that God has been prompting him to slow down (he is burning the candle at both ends, and I am concerned) not just on the road, but in other areas as well. The Luke and I are still sort of at odds with each other over his boo-boo. At some point he may admit that his latest over-priced owie is the result of not listening to the still, small voice of the Spirit, warning him, guiding him, but right now he’s just defensive.

Last night after they got home from the emergency room (I refused to go, because I just get mean), I opted to go for a late evening walk instead of stewing, brooding, and ranting. I clambered through the fence just at the edge of the property and started following a disturbingly well-traveled critter trail. I’d gone about 50 yards, noticing deer and horse and bunny and dog (or coyote) tracks before I spotted this… 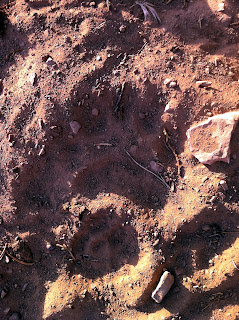 The Ethan says it’s a bear track. Less scary to me than a mountain lion, because bears don’t usually PLAY with their food, but still… I snapped the picture and quickly made my way back to my usual walking route, berating myself for failing to stop and grab my pistol before I left the house in a huff.

Yeah. I do it, too. Sometimes, especially in times of emotional distress or even emotional eustress (that’s ‘good stress’), I don’t listen, and then I have to ask for mercy. My mercy last night was not being eaten by a bruin.

The lesson? If you’re going so fast and furious that you can’t slow down to hear and obey the Spirit’s voice within, you’re going too fast. It’s liable to cost you, and those who love you, something down the road. Don’t wait for the “wake-up call,” just WAKE UP!