Skip to content
Posted on 2010 by Niki Turner Posted in Generations and Age Groups, Grandparents, Pregnancy

Not necessarily in that order, of course.
Why, you ask? 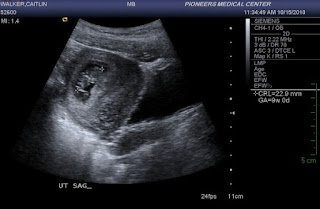 I’m going to be a grandmother sometime in the latter half of May 2011!

DD invited her mother-in-law and me to be there for her ultrasound today. We heard Baby’s heartbeat, saw lots of wiggling already, and received a good report from the ultrasound technician. Everything looks good, all appears well, and we’re on our way to the next generation.

So, I perceive the need to take up those grandmotherly crafts I’ve been ignoring. Quilted blankies, crocheted booties and caps, and knitted … um … Okay, I haven’t figured out if I want to push the knitting thing. I tried it once. Made an extremely long and unattractive scarf.

Anyway, while I am more than happy to be a yarn-totin’, quilt-makin’ G-mama, I reserve the right to be called something other than “grandma” for several reasons.

First, I hate having to clarify WHICH grandparent we’re talking about by adding a first or last name. (Have you ever heard small children attempt to say “Niki”? It comes out as Ninny or Icky.) While I might BE a ninny sometimes, and I have moments when I act “icky,” I’d rather not include those traits in my role as a grandparent.

Second, my daughter’s MIL is happy to be called grandma, and since this will be her fourth grandbaby, I figure she’s earned the title!

I’ve chosen my favorite somewhat trendy, a little unusual, and definitely different grandma nicknames. It’s all in fun, of course, since little baby bunting will undoubtedly come up with his or her own version, but at least this gives me some illusion of control. And I need that illusion, you know!

“Cast your vote” for the grandma nickname you think would suit me best:

6 thoughts on “Must learn to quilt, crochet, and knit!”