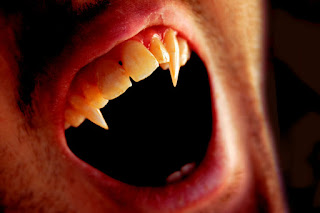 I’ve battled fear for most of my life. Even as a child I took the monsters-in-the-closet thing to new levels of terror. I could work up a heart-pounding, hair-raising, teeth chattering hysteria simply by thinking about something hard enough. I can’t tell you the number of nights I stayed up reading until the wee hours of the morning, not because the book was so good, but because I was afraid to turn out the light for fear of the live-action, Technicolor nightmares that plagued me.
I heartily dislike flying. Well, the flying part is actually okay. It’s the fear of falling and crashing that gets me. Statistically, though, I’m safer at 30,000 feet in an over-sized aluminum can with flexi-wings than I am driving to the grocery store for a gallon of milk.
Milk that could be contaminated, you know, with some cancer-causing toxin.

via Angie Perkins
In fact, I’m more likely to be killed in a donkey accident or be eaten by a shark than die in a plane crash. And let’s not talk about sharks, and the ocean… I’m strictly a beach girl. I mean, who KNOWS what lurks beneath those waves? Of course, now we’ve been encouraged to avoid sand, because there are — gasp — GERMS in it.
Do you see where the deception sneaks in with the fear? It takes away logic through the power of assumption. Maybe I’m just hyper-sensitive to fear-based messages. Maybe not. But these days we seem to be inundated with messages of fear.
Here’s the question: If you take the fear out of the message, does anything of substance remain?

If you take the fear out of that “lead in the lipstick” e-mail warning, what’s left? Not much. It’s like sugar water with food coloring in it. If you take out the tint, all that’s left is sugar water. But we’ll choose the colored water over clear water every time. Even for our hummingbirds, who could care less about the red coloring in the water. I wonder if they have little tiny tweet reporters warning them of the hazardous consequences of all that red dye?
Now before you start protecting your fear with statements like “a little fear is healthy,” let me remind you, the goal of all fear is paralysis. It seeks to rob you of your freedom to live. Those who promote, preach, preserve and –worst of all– profit through fear-mongering are people who have no freedom at all, and resent the freedom others have. Their thoughts, their feelings, even their dreams are tied to and controlled by the very things they fear most, whether it’s financial collapse, a Democrat in the presidency, global warming, nuclear winter, a Republican in the presidency, pick-a-critter flu, brain cancer from cell phone use, communism, razor blades in Halloween candy, Y2K (Oh yeah, that was worth all the worry and stress, wasn’t it?) or ghosts under the bed.

Did you know the Bible contains more than 365 admonitions to “fear not” or “be not afraid”? That’s at least one for every day of the year.
Can you imagine having an agoraphobic child? A little one too afraid to even come out of his or her room? Afraid to eat, afraid to sleep, afraid to go to school? You’d be traumatized! In the same way, God doesn’t want us to live in terror. He wants us to live in freedom, because He loves us. I’m going to challenge you to examine what you see and hear and read over the next few days and begin to draw a line in the sand (yes, the germ-ridden sand) between what is fact and what is fear-based.

I want a ribbon. An anti-fear ribbon. But I can’t decide what color it should be.

3 thoughts on “Losing the terror war at home”