Scooby Doo cartoons were the scariest thing I watched growing up. You never knew who the bad guy REALLY was. It only took a few episodes to realize that the ghost, or goblin, or swamp monster, or whatever, was really a guy in a costume (wasn’t it always a guy?) with a greedy plan to prosper himself at the expense of someone else.

These days we seem to be surrounded by greedy people with schemes to profit and empower themselves more and more at the expense of others. Instead of putting on costumes, however, these villains hide behind other people, ideologies, religions, political positions, and real, manufactured, and imaginary wars. Sometimes they even hide behind masks. Actual masks.

It’s tempting in these hours and days to yield to fear, to react in panic, and to begin shouting, spitting, and blaming whatever and, or whomever, we see. Lots and lots of people are telling us where to point. What they forget to tell us is that whenever we point a finger, there are three pointing back at us. We still haven’t learned Adam’s lesson in the Garden of Eden… resorting to casting blame does not solve the problem. 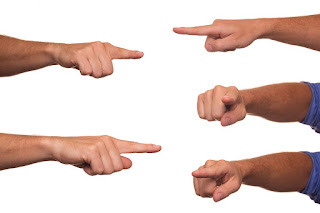 A particular verse of Scripture keeps coming to mind, from Paul’s letter to the Ephesians. Now, mind you, the church that was in Ephesus was a divided, contrary bunch in a crazy, pagan city with a lot of really strange goings-on… the kind of things that would make today’s Christians who are in a snit about “keeping Christ in Christmas” completely berserk. (For more on ancient Ephesus, this is an excellent article: http://bit.ly/1QAFhgV)

Wait a minute… our struggle, our battle, is NOT against people?
No. Our struggle is against the unseen enemies of the soul. The temptation to be ignorant, divisive, greedy, loveless, fearful, angry, hateful, prideful, selfish, and so on.

Ephesus was in the midst of some serious socio-political upheaval. I wonder if the Christians there were tempted to start pointing fingers at their “enemies” who wanted, in some cases, to kill them. It’s a natural reaction. If someone wants to destroy you, it’s primal human nature to fight back. But according to Paul, battling “flesh and blood” isn’t going to solve the problem.

In other words, start with your own heart first. You are, after all, “a heavenly place” because the kingdom of God is within you. And you are the only “heavenly place” you have direct authority over.

So ask yourself, what’s manipulating your emotional reactions? What’s driving your thought processes? Who told you to feel or think or react that way? In too many instances, every day, I have to admit it’s not the Spirit of God… it’s me. My flesh. My fear. My ignorance. Sometimes it’s just because I’ve been feeding myself nothing but the news, so that’s what comes out.

Now, I’m not saying that people don’t do bad, evil, wicked things. They do. Because they, too, are being controlled and manipulated by those “spiritual forces of wickedness” Paul was talking about. Here’s the problem… we don’t have the power to change them, we only have the power and authority to change ourselves. As Ghandi said, “Be the change you want to see in the world.”

We have to start somewhere, as the song we sing at Christmas says:
“Let there be peace on earth, and let it begin with me.”