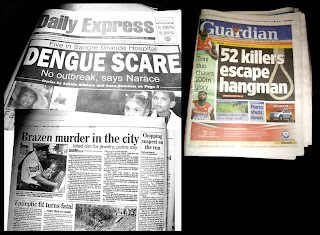 So I’m standing in line at the grocery store the other night surreptitiously eyeballing the tabloids. You know, the ones with the headlines that have Brangelina splitting up on one page and adopting quadruplets in the next issue? Or the ones with pathetically Photoshopped baby aliens climbing out of a VW van exposed during glacial melt in Alaska? What’s disturbing is that our “regular” headlines – newspapers, Internet, and the evening news – don’t look much different than the freaky tabloid rags. They are all guilty of using shock value to provoke emotional reactions from their audiences. It used to be called “yellow journalism” and it was frowned upon. With today’s ability to tweet and retweet and blog and reblog at the click of a mouse, “news” is transferred at fiber optic speed and we’ve all become armchair journalists.
Have we lost the ability to tell the difference between a news story and an opinion? Do we no longer have the ability to discern the difference between fact and fiction? Based on the number of absolutely fraudulent emails that pass through my inbox, no one cares whether or not a story is factual, as long as it agrees with his or her viewpoint.
In much the same way proofreading (editing) has gone the way of the dinosaur in the publishing world, it seems fact-checking is no longer considered a viable aspect of journalism. I’m sure it’s related to the time factor. To get the “scoop” on a story we have to publish or post without taking the time to verify sources or data. The result? Embarrassing stories like last month’s “balloon boy” saga, in which a father hungry for the spotlight devised a scheme to capture the attention of the nation for a few hours. So whose responsibility is it to check the facts? It used to be relegated to “fact-checkers” locked away in the bowels of the New York Times and the Chicago Tribune. We expected truth from our news sources. Did we get it? Hard to say. My grandmother never did believe man had really landed on the moon – she insisted it was a big hoax, filmed on a Hollywood set.

Today, you have to be your own fact-checker. It’s your job to research and verify the information you receive and believe. And it’s especially important to do so before you pass that information on to someone else.
The Bereans, we are told, “…were of more noble character than the Thessalonians, for they received the message with great eagerness and examined the Scriptures every day to see if what Paul said was true.” (Acts 17:11)
Notice they weren’t rebuked for checking out what Paul said, they were declared to have “noble character.” Both the Old and the New Testaments admonish believers not to accept accusations against others without two or more witnesses. Proverbs says the man who answers before hearing the WHOLE story is a fool.
Does that mean when we mindlessly pass on a sound bite, or out-of-context quote or photo, or someone’s opinion as fact, without examining it for truth, relevance, and context, that we are demonstrating a lack of  integrity? Or that we’re acting foolishly? At the very least, we’ve fallen into the category of “yellow journalists,” selling our point of view with falsehoods. When people start jumping on bandwagons before they figure out where the bandwagon is going that’s called “mob mentality” and it usually comes to a bad end.

Pull out your fact-checker glasses (they’d have to be cat-eyes, of course, with the little chain attached to the ear pieces), grab your theoretical red pencil, and start doing your homework.
Become a Berean when it comes to those tear-jerker forwards and wildly biased political statements from one side or the other. Carefully review the accusations that come your way and don’t formulate an opinion until after you’ve checked all the facts, on both sides.

And yes, that’s me… thanks to yearbookyourself.com via 1960. The hair is really bad, but I love, love, love those glasses!