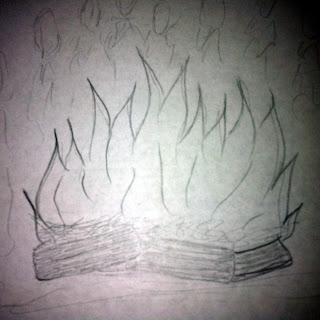 When I sat down today to create my “hometown memory” for yesterday’s post, the first thing that came to mind was the smell of the Glenwood Hot Springs Pool.
Rotten eggs.
No, seriously, my hometown smells like rotten eggs. That was how you knew you were home after the three-hour drive from Denver… you smelled the pool.
It really doesn’t smell that much anymore. They’ve added lots of chlorine and made things much more civilized, but there’s still a faint whiff of sulfur on the clothes and skin of anyone who has visited the pool recently.
BUT… I couldn’t draw the pool well enough to actually resemble a POOL, so I opted for my second hometown memory… “tire fires” during teenage weekend keggers at Transfer Trail and various other locales.
It’s only in my adulthood that I wonder how much lung damage we incurred, standing around heaps of burning tires every weekend (and a few weeknights), guzzling illicit beverages and smoking cigarettes and trying really hard to pretend we were cool and grown-up.
We were neither.
PART TWO: Last request if the world was ending. 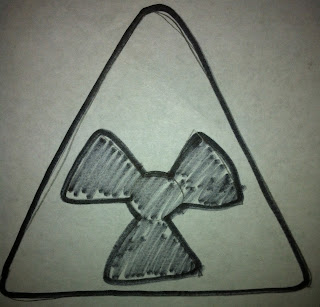 UGH. I don’t want to think about it. (Note: The first thing I saw when we first visited the town we planted a church in was the 1950s-era radiation warning sign tacked to the side of one of the downtown buildings. It creeped me out. In retrospect, I should have paid more attention.)
My parents’ generation had bomb shelters and drills at school for what to do if Russia (or whomever) decided to start nuking us.
My generation was told, “the nations of the world have enough nuclear bombs to blow up the planet 472 times.” Bomb shelters were laughable. Drills were nonexistent. Our response? “Let’s all move to Colorado Springs, because NORAD will probably get hit first and we can go out in the first wave.”
Talk about depressing.
Since then we’ve weathered 9/11, a couple of wars in the Middle East, lots of global warming, SARS and H1N1 epidemics, and a plethora of other scary, potentially world-ending situations. I’ve panicked over more than one, and finally come to the following conclusion…

Therefore do not worry about tomorrow, for tomorrow will worry about itself. Each day has enough trouble of its own.