“News travels fast.” “A little bird told me.” “I heard it through the grapevine.”

Gossip and rumors are certainly not exclusive to small towns. An entire facet of the international entertainment industry is devoted to gossip, rumors, and speculation about the rich and famous. But in small communities, the rumor mills and prayer chains (which are all too often one and the same thing) have mastered the art of broadcasting information without benefit of media outlets, stiff-haired news anchors, or roving reporters.


It kind of has to be that way in a place without a daily paper, local radio or television, I suppose. As someone here has said, if you die on a Wednesday afternoon, you won’t be officially declared dead until the following Thursday, when the paper comes out. The advent of texting, Facebook, and Twitter is slowly changing that, at least among the cyber-connected populace, but the results aren’t always trustworthy. Now we’ve got e-mail hoaxes and Photoshopped pictures and who knows what else to content with. Just the way government and big business and Hollywood put a “spin” on stories to drive public opinion in a certain direction, when your sources of information are emotionally involved, frequently hard-of-hearing, and sometimes vindictive, the “story” you get may not have anything in common with what the story actually is.

For example, a friend’s husband had lunch with a mutual college buddy in a neighboring town. Before the husband could make the hour-long return trip home, his wife had received multiple messages that her husband was canoodling with another woman. The messages progressed from “do you know where your husband is?” to “I’m so sorry. When will the divorce be final?”


Mark Twain, aka Samuel Clemens (who also had lots of opinions about small towns) experienced a bit of this himself, when someone got his name and his cousin’s name confused. The cousin, who had taken ill during a trip to London, eventually recovered, but for Twain, his mistakenly reported illness resulted in his death, prompting him to send the following letter to the New York Times back in 1897. 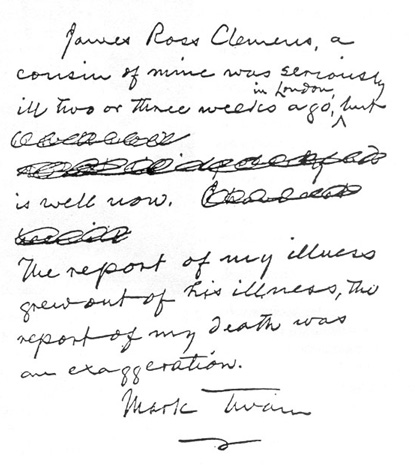 At the paper, we have to be careful when we post obituaries to note if the deceased is the elder member of a family disposed to confer the same names on successive generations. Failure to do so has resulted in teary telephone calls and panicked friends of the not-dead (Undead? no, that’s not right, either.) relation.

Finding yourself in the center of a spiral of scuttlebutt can be a bit unnerving. It’s driven many a person into isolation, or right out of town. Others laugh, and let the back-fence talk roll right over their heads without getting bitter or vengeful.


But what does it take to survive a bout of gossip? Becoming a hermit doesn’t work, it just gives the rumor mill a whole new reason to talk about you. Face it, that network of social chatter isn’t going away. Your best bet? Start your own rumors. About yourself. See how long it takes to come back around to you, and how messed up it is when it gets there!

One thought on “Heard It Through the Grapevine”