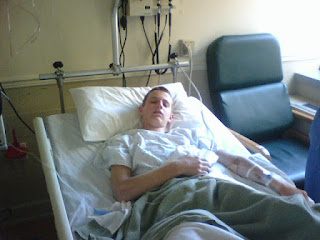 The picture at left is of my oldest son. Two years ago he managed two major accidents (boys will be boys) that required immediate orthopedic surgery and lots of titanium within a three-month span of time. We’d just refinanced our home to make some needed repairs, and were able to use that money to pay his $50,000 in bills. If we hadn’t had that money, the hospital said they would be happy to put us on a $1200 a month payment plan. Yeah, right. Because everyone has $1200 a month in disposable income lying around, don’t they?

As a mother of boys (one of whom has a cast on his arm right now), the wife of a man who likes “extreme sports” and works in the construction business, and an only child of two parents who also have no health insurance because they were self-employed, health care concerns me. Everytime my boys go to play football with their friends, or ride a skateboard, I have to squelch that panicky feeling that this could mean another visit to the ER, and another giant bill!

The recent discussion (or should I say arguments?) about health care leave me feeling battered and bruised. Everyone has an opinion, and everyone is willing to voice it, or tweet it, or FB it, or e-mail it.

Two things concern me with this debate. First is the spread of misinformation. More than half of what I’ve received are based on half-truths, misquotes, assumptions, or trumped up ideas spouted by talking heads on our multiple news programs. And we are incredibly swift to espouse these statements as truth, because they come from people we trust, people we have things in common with, like our faith, or our labels as conservative or liberal.

Yet, as quick as we are to pass on an e-mail touting an insidious conspiracy to take grandma’s meds away and let her die a slow, painful death, we are unbearably slow and unwilling to take the time to read the original document referenced, to listen to a complete speech instead of a soundbite, or even to visit snopes.com and make sure the e-mail isn’t a hoax created 10 years ago with the names changed to fit the times.

My second concern is the animosity and ill-will this topic generates. I’ll be the first to say I don’t know exactly what I want to do about health care. I don’t like taxes any more than the next person. I don’t like the idea of government control, either, whether it’s Democrat or Republican, liberal or conservative (but that’s a whole other topic.)

What I do know firsthand is the system we currently have — not of health care, but of PAYING for our health care — is screwed up. When a prescription in the U.S. is $5 per pill and 93 cents from Canada, something’s not right. And don’t give me the “Well, that pill might not even be from Canada, it might be from India!” Yada yada yada. Don’t you think we’d know about it if people were dropping dead from taking their prescriptions in Canada? We know about every sick cow they’ve got!

On one of our hospital bills, and thank God there haven’t been many, I found a line-item charge for a two ounce bottle of baby shampoo. We were charged $8. That’s greed, plain and simple. I don’t know who’s getting all the money, but somebody is!

When health care becomes a profit-making venture for administrators and insurance companies and pharmaceutical networks — people who, unlike our doctors and nurses, are well-removed from actually caring for people’s health — the public loses.

Folks who are blessed enough to have good insurance policies — especially the people in government agencies or government funded organizations and people in huge corporations — are up in arms about the possibility of losing the security they have. I don’t blame ’em. But, if you were on the other side of the argument — one of the people without health insurance, either due to preexisting conditions or because it simply costs more than you can afford (private insurance is much, much more costly than group policies) — what would you want your fellow Americans to do for you?

No one in the world’s wealthiest nation should go into bankruptcy, lose their home, or be left with hundreds of thousands of dollars of interest-accruing medical debt because of an illness or injury in their family. And yet it is happening every single day, all across our country.

Is there a solution that will be congruent with the Golden Rule — doing unto others as we would have them do unto us — when it comes to the health and well-being of our nation’s citizens? Can we craft a health care plan that takes that kind of thinking into consideration, or are we doomed to follow the gold in our pocket instead of the golden rule? We are the greatest nation in the world, right? You’d think we could come up with something more than a big political battle.