We all need to laugh. It’s good for the body, good for the soul, good for the spirit. Ever have one of those weeks where you find it hard to lift the corners of your lips? That’s when you need artificial laugh assistance. So here you go…

This haute couture apparel is featured in a hunting catalog that arrived at my house, sandwiched on a page between the camouflage diaper bags and the turkey shaped alarm clock. (He gobbles to wake you up, the snooze button makes the sound of a shotgun blast.)

This is either an attempt at keeping the hubby at home during hunting season, or at attempt at scaring away all the woodland creatures.

Oldest son attempted to open the front door at the new church building this week with his new key. Instead of wiggling the door until the tumblers fell into place and the key would turn, he just kept turning the key until it snapped off in the deadbolt. Youngest son was supposed to go rake leaves with his pal but couldn’t get inside, so he called older brother. Then sister arrived. Then the cops showed up. Some helpful neighbor was convinced my rascally rat pack of teenagers was guilty of B&E in broad daylight. (If they knew us, they’d know we would have raised better criminals than that!) 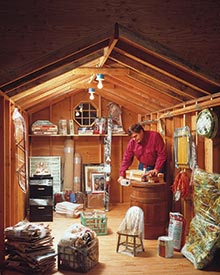 The following day, while waiting for copies of the new key for the new deadbolt, I came across this display for something called “Flat Twine.” It’s kind of like a roll of plastic wrap with handles. Kind of handy. A little TOO handy for the guy in the picture. I wonder if it comes with a warning label: Should not be used without adequate supervision.

Um… can you say OVERKILL? It’s the Griswold family attic.