Skip to content
Posted on 2012 by Niki Turner Posted in change, faith

If you’ve never had an opportunity to ask why something did or didn’t happen in your life, you’re either a zombie or a Stepford wife. Or both.

The problem with the question “why?” is that it disables us. The question why (and usually the answer to the question, if there is one) changes nothing. Once we’re caught the why cycle, we cease to make forward progress.

Asking why is the equivalent of yanking on a vehicle’s parking brake. Until you release the why you aren’t going to be going anywhere fast, and you’re probably going to pollute the air around you with the stink of burning brakes. Met any stinky people lately? Folks who are caught in a rut so deep it’s just a grave with both ends kicked out? It’s entirely possible they pulled the why brake on life after experiencing a loss or a failure or some unexplainable event. Now they’re stuck.

I’ve spent the last 14 years asking why about the state of the church the Patrick and I planted. Add to that the regular sort of whys like why can’t we get ahead financially, and why did so-and-so get sick or have that accident, and why wasn’t that prayer answered, and you risk ending up quite spiritually/mentally/emotionally constipated. No matter what you’re doing, that ugly question keeps hogging your attention, holding you back, keeping you bound up in grief or anger or sorrow or doubt that can’t be assuaged by platitudes or soothed by time.

That’s the trouble with the question why. There are no answers, no solutions. More often than not, why is little more than a dead-end.

Are you ready to move ahead? Ready for a change? Ready for transformation? You’re going to have to set aside that box of whys. It’s ballast, sandbags, dead weight… useless questions without answers.

I’m unraveling the knots that have tied me to the whys and why nots that came with the assignment of planting a church in a community of 2,400 people that already had more than a dozen established Christian churches. I’m disengaging from the whys that relate to my oldest son’s two accidents in three months that required emergency orthopedic surgeries, all paid for without the benefit of insurance or Medicaid. I’m untangling myself from the why I find myself back on my parents’ homestead as a 41-year-old “boomerang” kid.

WHY am I separating myself from the whys?

Because they really don’t matter. Even if I had the answers, they wouldn’t solve anything. I might be able to explain some things, if anyone cared, but I would still be left with the same situations.

Perhaps it would behoove (isn’t that a fun word?) us to take a lesson from the greenhouse. (While we were away, my parents added a greenhouse to the back of the garage. I love it. It’s a sanctuary for someone who loathes wind and bugs, but wants to play in the dirt. However, it has taken me three days to uncover the dirt.) The greenhouse was “left to itself” for a year or two, and the resulting mess has taken me a few days to clear out … lots of pruning and pulling and clearing and cleaning.

I should have taken a picture, but I didn’t… in the middle of the greenhouse sat a heap of dry, dead vines, about a foot high and 3-4 feet in diameter. Riddled with spider webs and general ickiness, the heap of dead foliage was one of the last spots I wanted to tackle.

I cleared dead leaves and weeds from the surviving strawberry plants, ripped out handfuls of dandelions and bindweed, hauled away the thorny branches I clipped off the overgrown primrose and some sort of cherry bushes. All the while, I kept getting a whiff of mint. But I didn’t see any mint, anywhere, no matter how hard I looked.

Today, in preparation for planting lettuce and spinach in the “kitchen garden” section, I tackled that heap of dead vines and uncovered a surprise: a few struggling shoots of fragrant green mint, forcing their way through the dense, dead overgrowth into the light, determined to LIVE.  I wanted to weep over those pathetic little sprouts.

Whatever has tried to bury you under a dead pile of whys and why nots is not enough to defeat you. You might be unnoticed, ignored, unrecognized, but the life that is in you is greater than any amount of detritus piled on top of you. Keep setting that bundle of whys aside every time it gets in your way, and press on toward the light and life that belong to you as a child of God! The future is bright… I’m sure those mint sprouts are saying the same thing. 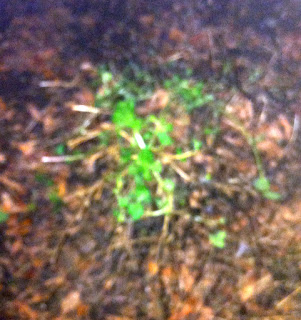