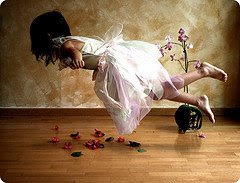 In my last post (Nice Girls Don’t Win), I introduced the idea that Veronica/Tinkerbell types win at the game of life, while Betty/Wendy types end up with a Jughead or a collection of lost boys

What if you want to shed your Wendybird ways, but you don’t know how to make the switch? We’re going to explore those steps in this series of blog posts.

First, let’s locate the behaviors, beliefs, and attitudes that repress your God-designed Tinkerbell self. Whoa! God-ordained Tinkerbells? Did that just knock your religious hat askew? Good.

Close your eyes and picture Betty and/or Wendy. Now put up a split-screen in your brain and insert your stereotypical “good” Christian woman. Don’t be surprised if the two images have disturbing similarities. It’s a lie most of us have bought into–even non-Christian women fall into the trap, because it’s part of the fall of man.

Genesis 1-3 tells the story of creation. God formed man from the dust of the earth and set him in the Garden of Eden to “tend and keep it.” And God looked, and said, “It is not good that man should be alone…” (excuse my creative license here) “… and I will make him a woman to clean up after him, to cover for his mistakes, to pet his fragile male ego, to make sure he doesn’t ever have to worry about anything because she will take care of it all so he doesn’t have to.”

That is NOT what God said. But that’s the kind of rubbish we’ve bought into. God didn’t say man needed a sex slave, a maid, a cook, a lawyer, or a doormat. What did God say? He said He would make for the man “a helper comparable to him.” The Hebrew language indicates an equal–although different–partner, not someone of less value or worth. You could go so far as to say a helper comparable is the flip side of the coin. Opposite but the same. Conjoined parts of a whole.

God created the “helper comparable” differently than he created the man. The Hebrew words indicate He “formed” the man, but He BUILT the woman (see Gen. 2:22).
You can “form” something without much thought, but to build something you need a plan. You form a casserole, but you build a wedding cake. You, ladies, are built!

Before the fall man and woman were called Ish and Ishshah. After the fall, they became Adam and Eve. What’s the difference? Ishshah is the feminine counterpart of Ish, all that is male. The names convey nobility, dignity, and strength. However, after their introduction to sin, Ish became Adam (generic term for human, used for men of low degree). And Adam gave Ishshah a new name: Eve (mother of my children.) He stopped referring to her by her God-given design and limited her to her function.

Here’s the root of the problem. We’ve jumped right into that assigned role and expanded and enlarged it to the point we’ve forgotten we were (are) Ishshah in God’s design, not Eve!

Wing Step 1: Change your internal identification. Eve represents your function in this earth, as wife or mother or employee or whatever. But you are not what you DO. Begin to think of yourself as an Ishshah — noble, dignified, and strong–for that is WHO you are.

Practical Assignment: For the rest of the week, everytime you see your reflection in a mirror or a window, or your computer screen, say “Hi, Ishshah.” It sounds crazy, I know. But it will incite a paradigm shift in your thinking.
YOU are noble, dignified, and strong.
YOU are loved by your creator.
More than you know.