Step 2 in Becoming Tinker Bells is to read or listen to the original story of “Peter Pan” by J.M. Barrie. It’s available free at www.gutenberg.org as an e-book or an audio book.
“Why,” you ask, “should I read a children’s story in order to change my behavior? “ Because in order to change your Wendy-ness, you must first recognize what it is! We’ll spend some time looking at Wendy-ish characteristics, and then we’ll take a look at Tinker Bell.

“Boy,” she said courteously, “why are you crying?”
Peter could be exceeding polite also, having learned the grand manner at fairy ceremonies, and he rose and bowed to her beautifully. She was much pleased, and bowed beautifully to him from the bed.

Fortunately she knew at once what to do. “It must be sewn on,” she said, just a little patronisingly.
“What’s sewn?” he asked.
“You’re dreadfully ignorant.”
“No, I’m not.”
But she was exulting in his ignorance. “I shall sew it on for you, my little man,” she said, though he was tall as herself, and she got out her housewife [sewing bag], and sewed the shadow on to Peter’s foot.

She gave him a look of the most intense admiration, and he thought it was because he had run away, but it was really because he knew fairies. Wendy had lived such a home life that to know fairies struck her as quite delightful. She poured out questions about them, to his surprise, for they were rather a nuisance to him, getting in his way and so on, and indeed he sometimes had to give them a hiding [spanking]. Still, he liked them on the whole, and he told her about the beginning of fairies.

“Yes,” said cunning Peter, “but we are rather lonely. You see we have no female companionship.”

“Are none of the others girls?”

“Oh, no; girls, you know, are much too clever to fall out of their prams.”

This flattered Wendy immensely. “I think,” she said, “it is perfectly lovely the way you talk about girls; John there just despises us.”

For reply Peter rose and kicked John out of bed, blankets and all; one kick. This seemed to Wendy rather forward for a first meeting, and she told him with spirit that he was not captain in her house. However, John continued to sleep so placidly on the floor that she allowed him to remain there. “And I know you meant to be kind,” she said, relenting, “so you may give me a kiss.” 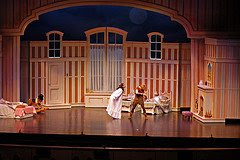 “Where are you going?” she cried with misgiving.

“To tell the other boys.”

“Don’t go Peter,” she entreated, “I know such lots of stories.”

Those were her precise words, so there can be no denying that it was she who first tempted him.

He came back, and there was a greedy look in his eyes now which ought to have alarmed her, but did not.

“Oh, the stories I could tell to the boys!” she cried, and then Peter gripped her and began to draw her toward the window.

“Wendy, do come with me and tell the other boys.”

Of course she was very pleased to be asked, but she said, “Oh dear, I can’t. Think of mummy! Besides, I can’t fly.”

“I’ll teach you how to jump on the wind’s back, and then away we go.”

“Wendy, Wendy, when you are sleeping in your silly bed you might be flying about with me saying funny things to the stars.”

“And, Wendy, there are mermaids.”

He had become frightfully cunning. “Wendy,” he said, “how we should all respect you.”

She was wriggling her body in distress. It was quite as if she were trying to remain on the nursery floor.

But he had no pity for her.

“None of us has ever been tucked in at night.”

“And you could darn our clothes, and make pockets for us. None of us has any pockets.”

How could she resist. “Of course it’s awfully fascinating!” she cried. “Peter, would you teach John and Michael to fly too?”