Skip to content
Posted on 2015 by Niki Turner Posted in guns, People and Society, violence 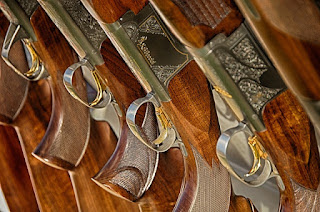 Today I flipped on the TV for my daily dose of unreality (General Hospital), only to be bombarded with news of yet another mass shooting. I feel sort of numb. Don’t you? That’s part of the problem.

That makes 355 mass shootings so far this year in the U.S. alone. That’s defining a mass shooting as an incident in which four or more people (which could include the gunman) are killed or injured by gunfire. We’re averaging more than one mass shooting a day. To put it another way, every 16 minutes someone dies from gun-related violence. And we don’t even hear about most of them… only the ones that tickle the media’s appetite for viewership. Note: the San Bernardino shooting was the second mass shooting today… the first was in Atlanta, and nothing got preempted for it.

The knee-jerk emotional reaction (and simple answer) for many people is to blame guns and gun owners, but I think that’s faulty reasoning. I’m a gun owner. Have been since I was 12 years old and got my first .22 rifle (after having been proven trustworthy with a BB gun). We currently have guns in our home, which are kept locked in gun cabinets. I’ve always had guns, always been around guns, so have the great majority of my friends and family in the communities in which I’ve lived.

The flip side of the reaction is to run out and buy as many guns as we can (which the U.S. did on Black Friday this year, surpassing all previous gun-purchase records), and to obtain concealed carry permits, and risk becoming the next idiot whose loaded weapon falls out of his/her bag at Country Barrel and inadvertently shoots someone in the leg. Or the woman who decides she should whip out her revolver and shoot at the suspected shoplifters running out of a big box store, heedless of the fact she’s in a parking lot full of people. Um… no. Sorry. Arming everybody is obviously not an answer. Some people are too stupid to own a gun.

Is there an answer? I don’t know. I wish I did. I wish there was something better to say every time we hear of another shooting besides “our thoughts and prayers are with XYZ community,” while the insanity and horror continues to run amok.

In the meantime, hug your loved ones, keep your affairs in order, and be ready to meet your Maker, because we’re living in a war zone, and the enemy combatants are US.