My uncle got married when I was 13 or 14, which entailed a trip to Princeton, New Jersey. For a small town girl from the mountains with big dreams and stars in her eyes, the entire trip was like stepping into the pages of a novel. Scenes are etched in my memory, from the glowing orange bubble that surrounded New York’s nighttime skyline as we approached the runway at Newark International Airport, to the beauty and charm of Princeton’s historic community, to our drive through the Holland Tunnel into Manhattan for my first visit to NYC.
We visited Battery Park and fed the pigeons. We looked out at the Statue of Liberty, wrapped in scaffolding at the time, as she underwent some sort of extreme makeover. We took taxis, saw “A Chorus Line” on Broadway, shopped at Macy’s and Saks Fifth Avenue. I ate bagels and New York pizza, and had a soft-shelled crab sandwich at a neon-lit restaurant in Times Square. We ascended to the top of the Empire State Building and walked through the concrete canyons of Wall Street. I loved it all — the sights, the sounds, the smells, everything.
But one memory, one place, stands out in my mind above all the rest — our visit to the Twin Towers of the World Trade Center. Here in Colorado we tend to make fun of the flatland tourists who gape at the mountain vistas, but I became one of those mouth-hanging-open gawkers there on the sidewalk outside the World Trade Center.

Image via Wikipedia
Inside and out, there was such an atmosphere of possibility, of hope, and an anticipation of greater things to come. There were no cultural barriers, no caste system, just this pervading sense that whatever you imagined, or dreamed, could come to pass. Granted, I was somewhat fanciful at that age. Still am, sometimes.

Eight years ago that spirit of possibility, that hope and faith that embodied not just the World Trade Center, but the American people, was viciously attacked by terrorists. In what seemed, and still seems, like a scene from a Hollywood film, commercial airliners were used like torpedoes to crash into the upper floors of both towers. Shortly thereafter, first one tower and then the second collapsed upon themselves.

The loss of life, the suffering and trauma of that day, is a scar upon our hearts. As Pearl Harbor defined my grandparents’ generation, and the assassination of JFK and the Vietnam war defined my parents’ generation,so the events of Sept. 11, 2001, have become a defining moment for my generation.
But I don’t want to remember the ugliness of the terrorists. I want to remember those towers as they stood, a symbol of what can be done, what can be accomplished, by a nation and by a people. I wish I could transmit the hope, the “all things are possible” atmosphere I felt within those buildings  to everyone who never had a chance to visit, to my children who don’t understand why I tear up when we see pictures and movies with the towers still standing.
So for today, as we remember the lives lost that day eight years ago, and we pray for the families and loved ones left behind, and we pray for our country’s wounds to be healed, I’d ask, for myself and for anyone who reads this: Take that image of the Twin Towers as they were, before Sept. 11, 2001, and hide that picture in your heart. Let that image inspire you today to take one step forward toward doing something you’ve convinced yourself is impossible, one step toward reaching out within your sphere of influence to touch someone’s life with hope and encouragement, one step toward making the world in which we live a place of hope, of possibility, and of faith. 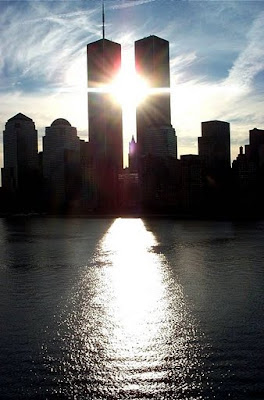 One thought on “A Teenager’s Memory of the Twin Towers”